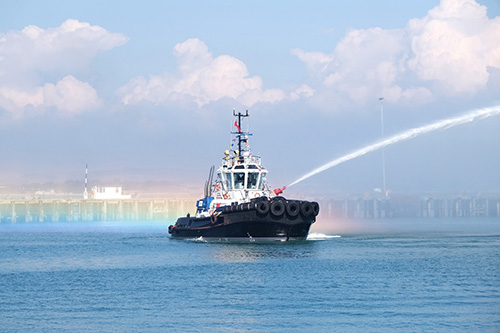 Picture: Rupert Best Tug putting on a display with its water canon producing a stunning rainbow.  Taken by Ted Toop

On Saturday 18th September, Portland Port held the official naming ceremony of the newest tug to enter the fleet, the Rupert Best.

The vessel has been named after former submarine Commander and Portland Port director, Rupert Best, who passed away in February of this year. Commander Best commanded the nuclear- powered submarine HMS Courageous during the Falklands conflict in 1982. He retired from the Royal Navy during the 1990s and was part of the consortium that persuaded Langham Industries to privately take over Portland Port from the Ministry of Defence in 1996, subsequently forming Portland Harbour Authority. Rupert was a strong advocate for both the port and Dorset as a whole and worked tirelessly to help the port grow to what it has become today.

The multi-million-pound tug entered service earlier this year shortly after the passing of Commander Best.  However, Covid restrictions forced any naming ceremony to be postponed until it was safe to hold. The new asset joins Portland Port’s existing tugs, the Maiden Castle and Rufus Castle, all playing pivotal roles in enhancing the port’s towage capability.

It was announced earlier this year that the new tug would be arriving at Portland Port following its construction in 2019. The tug was built in Turkey to a Robert Allen design, the Sanmar Sirapinar class ‘RAmparts 2200’ azimuth stern drive tug will improve and help support the port’s ability to welcome larger vessels.

Guests who attended the naming ceremony included family members, friends, former colleagues who worked with Rupert in the Royal Navy, along with colleagues at Portland Port and local dignitaries.

In a traditional ceremonial launching, the vessel’s plaque was revealed before the tug was named by smashing a bottle of Rupert’s favourite cider, Lancombe Rising, on the side bow of the tug by a member of the tug’s crew on behalf of Mrs. Best.

Harbour Master, Captain Mike Shipley said, “The naming of ships is always an exciting and memorable event, however the naming ceremony of the ‘Rupert Best’ was also a touching tribute that we were delighted to be able to share with Rupert’s family and friends.”

The event was organised with the help of Rupert’s close family and members of staff at Portland Port. 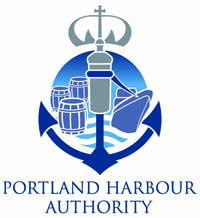 New Local Notice to Mariners and General Directions can be viewed here.